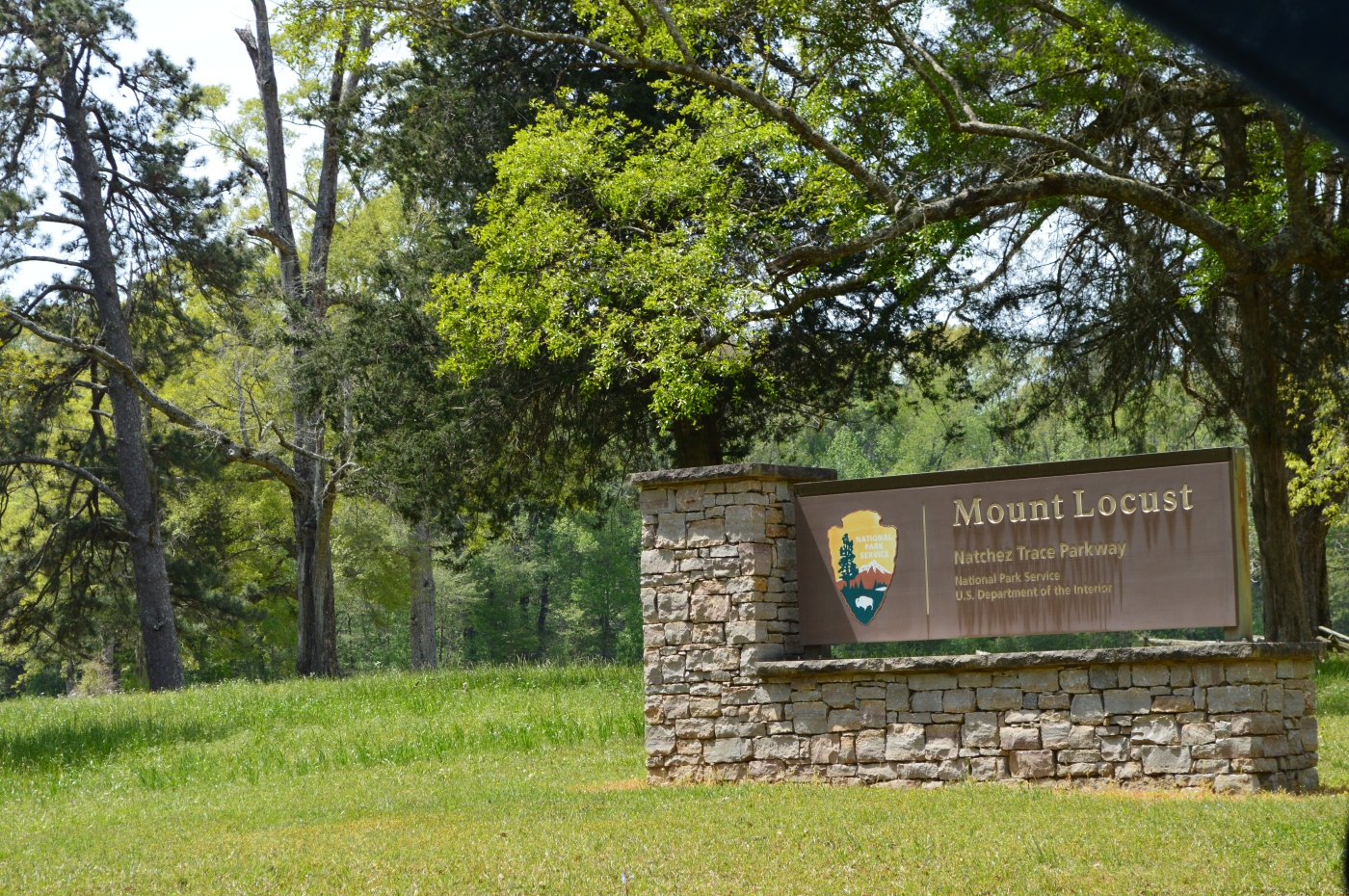 Five miles north of Emerald Mound, at Mile Post 15.5, we found our next planned stop along the Natchez Trace Parkway.

Historic Mount Locust is the only remaining inn along the trace of over fifty inns that were spread within a day’s walk of each other, or roughly 20 miles apart.

Originally started in 1780 by John Blommart as a working plantation, it was quickly realized that profit was to be made by offering food and lodging to the “Kaintuck” boatmen as they traveled the trace back north on foot or by horse after floating south on keels and rafts down the Mississippi river.

In 1785 the property was sold to a business associate of Mr. Blommart named William Ferguson and his wife Pauline after Blommart was jailed and lost his wealth for leading a failed rebellion against Spanish control. The Fergusons supplemented their income from the plantation by continuing to offer food and lodging services for .25 cents a night.

Meals consisted of corn mush farmed from the property. Lodging would often consist of a place to sleep on the porch or in the yard, but it was more than adequate for a weary traveler.

As the first stop along the trace, business was so good that a second-annex consisting of four rooms was added behind the original home. This structure no longer remains today. The annex was called Sleepy Hollow, and even though it has no connection to the story of the headless horseman, I couldn’t help but wonder what stories were shared inside those lost walls by those who passed through.

A view of the rooms in the main house (below) gives one a feel for how it may have looked in its heyday. The main home is furnished with period (although not the original) furniture.

As we soaked in our surroundings it wasn’t difficult to imagine how the inn became so popular with travelers.

In 1801 William passed and Pauline would continue to run the property while raising seven children until she later married James Chamberlain, the overseer at Mount Locust, in 1806. They would have four more children together for a total of eleven before James also passed in 1810.

After the invention of the steamboat, which could return travelers north on the Mississippi quicker and more comfortably than traveling by foot, traffic along the trace started to disappear and around 1925 the inn became a rural retreat which operated until 1842 and a cotton plantation until the start of the civil war. So it seems that the trace wasn’t the only trail being blazed through those parts of Mississippi, as Pauline Chamberlain, twice widowed and with eleven children to raise, was also a successful business woman in an era that was not so accepting of entrepreneurial women as it is today.

If you follow the trail behind the home you pass through the grounds were the Overseer’s quarters and Sleepy Hollow once stood before finally arriving at the site of the slave cemetery. Although only ten names are listed on the board commemorating the site, it is said that forty-three slaves are buried here. A single headstone marks the location of the cemetery.

Beside the home we gazed upon this fantastic old grape arbor. Fun fact, Mr. McGee and I have five vines in our yard of various varieties from which we make our own wine every fall. We recognized these as probably either a muscadine or scuppernong and marveled at the age of the vines judging by their size at the base.

We next came upon the family cemetery where William, James, and Pauline received their final rest, along with various other family members and one traveler. The lilies and Azaleas were blooming which created a beautiful and gentle reminder that life continues.

And continue it did.

Five generations of Chamberlains made Mount Locust their home until the last family member left in 1944. The home sat empty until 1954 when the National Park service purchased the property and began restoring the inn to it’s former 1820 condition.

In 1957 Mount Locust was dedicated and it has become one of the most popular and informative stops along the Natchez Trace Parkway.

Next week we continue to head north and stretch our legs along a short but worthwhile interpretive trail.

As always, if you want to help support this site please like, click, share, all that stuff! Or, you can make a donation or buy merchandise HERE.