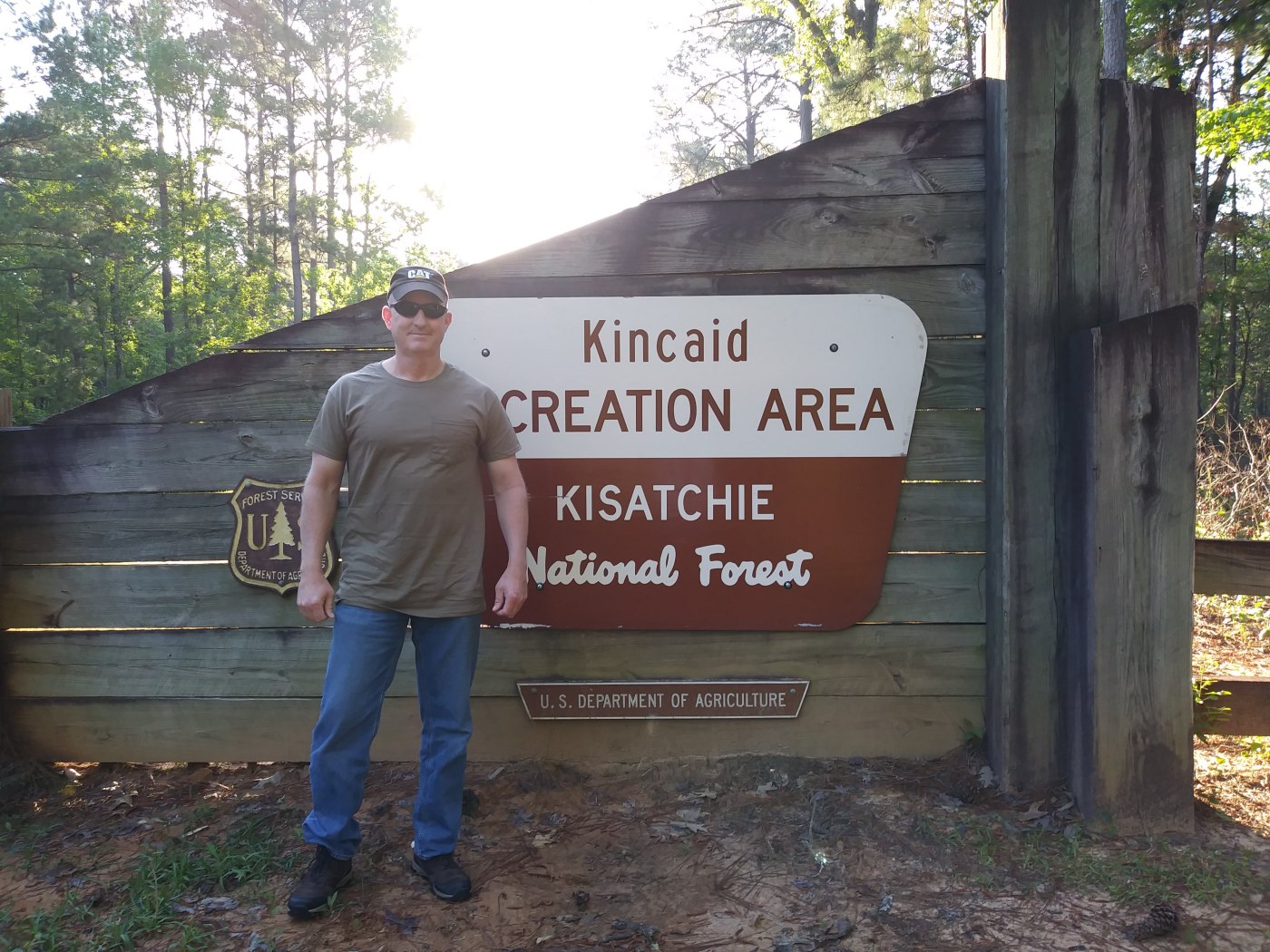 We said goodbye to Falling Waters State Park and started driving west. Our plan was to make good time by driving the interstates as we headed to the Kisatchie National Forest and the Kincaid Recreation Area where we planned to stay for the night, but road construction, distracted drivers and more than our fair share of near side swipes had my nerves completely frazzled. Mr. McGee, sensing my anxiety level reaching peak, decided the back roads were more our speed and we quickly exited the interstate opting for a less congested state road route. This added some time and miles to our trip, but the peaceful drive and beautiful scenery made up for the extra time and expense.

We put 542 miles behind us before arriving at the Kincaid Campground just around 5:30 pm. The first thing we did was check out the primitive camping area which was completely empty and a little spooky. We then drove around the first loop of developed campsites where it must have appeared to the campground host that we were completely lost as we meticulously checked out every site, because after a few minutes of us backing into and exiting several sites he decided to come see if we needed any help. We explained to him that this was our first time at the campground and our first trip camping in our SUV. It was at that point that we received that friendly smile that we would later recognize as seasoned RV’rs getting a good chuckle out of our newbie-don’t-know-what-the-heck-we’re-doing floundering. The host let us know that if we wanted a site with a view of the lake that we should also check out the other developed loop.

We drove around the second loop and found a nice site with a trail down to a small fishing pier right on the lake. Normally we would avoid a campsite with an attached trail as it brings a lot of foot traffic through your campsite, but it was getting late and we were one of three campers at the campground so foot traffic was probably not going to be a big thing.

With Mr. McGee’s Access Pass we paid a total of $9.50 for a paved campsite with water, electric, picnic table, fire ring, and grill. Not a bad deal considering the primitive camping area was only a few dollars less.

We took a short walk to check out the other amenities the campground had to offer, which included a dump station, hot showers, flush toilets, a playground for the little ones and HIKING, HIKING, HIKING!

The Kincaid Recreation Area has a pretty nice trail system that runs around and through the park and along the edge of Kincaid lake. Access to the lake is available by boat ramp and there is even a swimming area with covered picnic shelters.

We returned to the campsite to settle in and found the campground host had placed this sweet little souvenir at our site! This gesture really touched us and gave us our first insight into the RV community. To this day that little rock lives in my china cabinet with a few other trinkets we’ve collected throughout our journeys.

But not everything was warm and fuzzy. The downside of Kincaid Campground, as with any campground near the water, was the amount of bugs! I’m talking they’ll survive the nuclear apocalypse kind of biting swarming flies that make you want to retreat to shelter or grab a flamethrower! Nothing worked to keep them at bay – not even a fairly thick layer of Deet and with only the SUV for reprieve we did what we could to manage getting dinner down and retreated to our SUV for the night.

By morning the flies had subsided and it was time for a shower. The bathrooms were okay – not the cleanest or newest – the showers were very hot which was just what we needed – BUT THE LARGE AMOUNT OF SCARY SPIDERS RESIDING IN THE SHOWER STALLS WAS NOT OKAY.

Now we live in the south, so bugs, spiders, lizards, snakes, squirrels, coons, ‘dillos, gators and bears are just a normal part of the camping experience, so when I say there was a large amount – I mean they were on the walls, in the corners, under the shower seat, in the soap dish, next to the sink, on the towel holder, inside the bathroom stalls and scrambling across the floor – Think the movie Arachnophobia!

Suddenly our first grand adventure started to feel like it was about to play out like a 90’s horror flick —— as while showering one of those eight legged residents jumped on Mr. McGee and gave him a pretty good bite. He quickly brushed it off and did what us good southerners do with “bad bugs” and applied swift justice. Now I’m a Nervous Nellie and not knowing what kind of spider it was my mind was going to a thousand bad places and spent the next 24 hours constantly checking his leg to make sure he wasn’t bitten by a brown recluse or anything that might put a swift end to the beginning of our vacation. However, luck was with us and it turned out to be one of the garden variety spiders.

Although we were early in the season and the place was nearly abandoned we felt very safe and comfortable at this campground. In hindsight, our early arrival probably accounted for the large number of spiders in the bathrooms. They pretty much had the place to themselves during the off season and took full advantage of the situation by staking their territory and defending it as steadfastly as any well fortified garrison.

We added Kincaid to our list of places we’d like to return and just hang out for a while someday anyway, but we made a note to be better prepared for the amount of winged and crawly critters that put a damper on an otherwise pleasant stay.

It was 7:45 am when we pulled out and headed toward Texas where we planned to visit Waco Mammoth National Monument and camp at Lake Whitney. That was when the GOOD STUFF began.