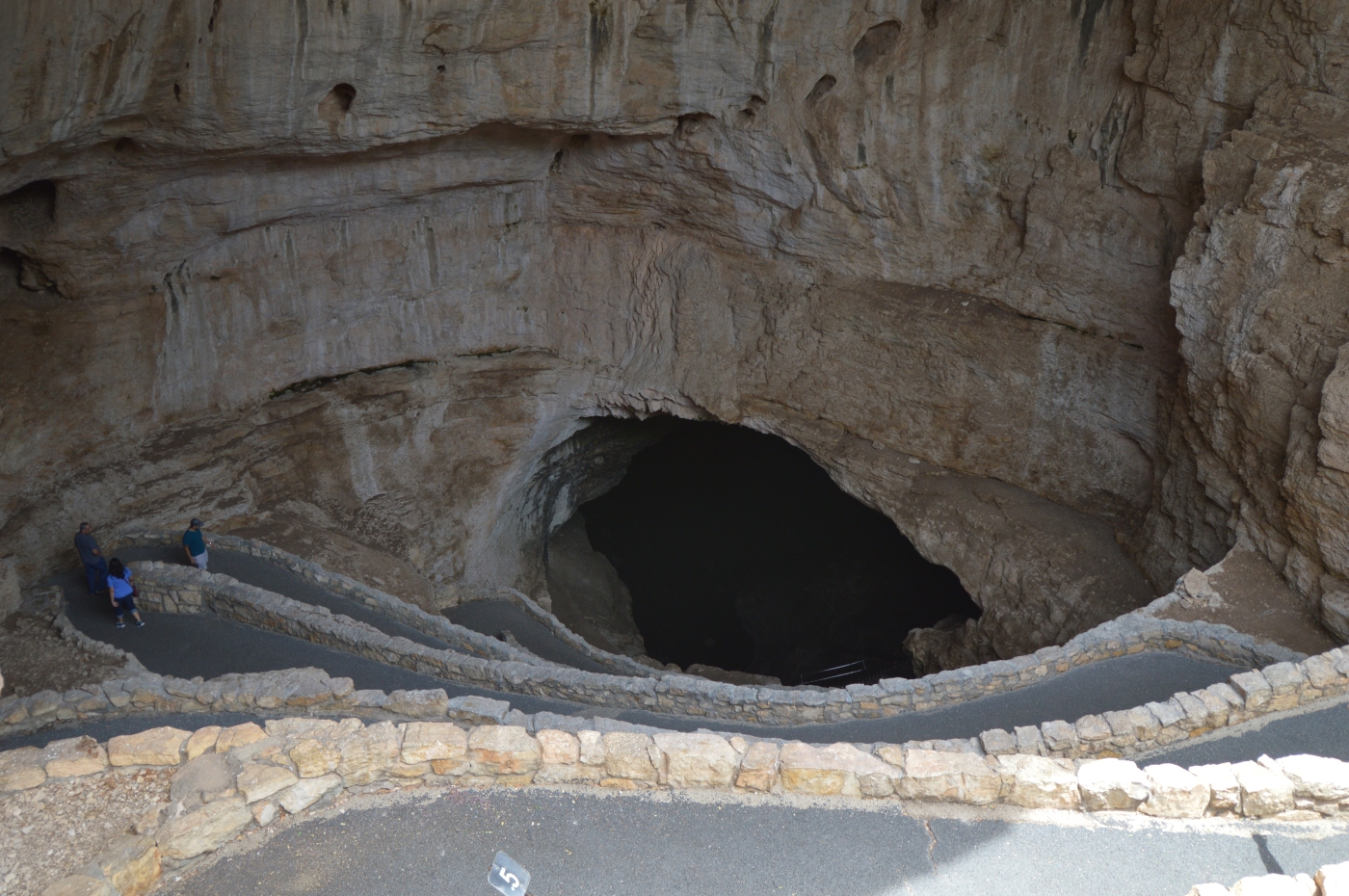 I think just about everybody over the age of 50 will relate to what I’m about to say at some point or another. You know how in your mind you still crave adventure like you’re in your 20’s? And because of this you don’t always consider the ramifications of doing certain physical activities? Well, maybe deciding to take the natural entrance to the bottom of Carlsbad Caverns was one of those times when we should have paused for a moment and thought things through a little more thoroughly!

That’s right, our next stop was Carlsbad Caverns and like the young minded middle-aged kids we are, we decided to hike the natural entrance to the bottom.

This is where I remind you that we are from Florida. Flat – Florida. Vastly lacking inclines and declines – Florida. The only stairs are mostly in tall office buildings and courthouse steps – Florida. You see where I’m going with this. When we read that it would take a 1.25 mile hike to descend 750 feet we thought it would be a piece of cake! We take hikes with longer distances all the time. Yep – this is where being uneducated about hiking diverse terrains can get you into a lot of trouble. Fortunately we didn’t run into any serious health problems. However, this would be my first (and probably last) trip to the bottom using the natural entrance.

About half way down my knees started aching and it wasn’t long until my right knee started to noticeably hurt. By the time we reached the bottom it felt like someone had jabbed an icepick though the side of my leg and left it sitting between my poor old knee bones! I began to worry about what might happen to the rest of our trip. Did I do any permanent damage? Would it get better? IS THE ELEVATOR WORKING BECAUSE I PROBABLY CAN’T WALK BACK UP? Or in the least I probably shouldn’t. However, my anxiety started to subside after we reached the rest area and lunchroom 755 feet below the surface. From that point forward the walk around the Big Room was far more old knee user-friendly and they both started to feel 80% better.

Hopefully if you’re reading this and new to outdoor activity you’ll learn by my near mistake – not all 1.25 mile hikes are the same! If you’re attempting something you’ve never done before definitely do your research in advance and take some time to train! Mr. McGee has a very physical job so for him it was just another day. Being in great shape makes such a difference.

Now I wouldn’t trade the experience for the whole world. The extras that I got to see by taking the natural entrance route ended up outweighing the actual risk to my knees. Seeing Iceberg Rock, a 200,000 ton boulder that was once a part of the cave ceiling before falling thousands of years ago, was an unforgettable experience. Just imagine how much noise that must have made!

Mr. McGee and I had been on a few cave tours together before. We’ve walked Ruby Falls and Forbidden caverns. But Mr. McGee had already been to Carlsbad when he was a boy. Before arriving he tried to explain the size differences between these caverns. Until seeing it for myself I simply could not grasp the concept. Although Ruby Falls and Forbidden caverns are beautiful and the interaction between nature and man somewhat intimate, those cave hikes are nothing compared to the enormous expansive spaces inside of Carlsbad Caverns! I was in complete awe. This is a place where you fully understand that we are not just a part of nature, but living inside of it. Nature engulfs us. There is something to be said about being deeply immersed inside the earth while simultaneously being in such an enormous space. It’s as if you can actually feel yourself being embraced by it – almost protected in a way. It can change the way you look out at the stars or across a desert plain. It alters what it means to dip your toe in the edge of a massive ocean or look to the top of a 14,000 foot mountain.

So remember when I said last week that this was the second stop on the day that changed our lives forever. That’s because it was here that I finally felt what Charles de Foucauld meant when he said:

“To receive the grace of God you must go to the desert and stay awhile.”

and I’m not the only one that had a life changing experience. Ever since that day Mr. McGee and I have had an almost uncontrollable urge to be closer to nature and closer to each other. We want to live with the earth instead of on it. We want to experience every new sight, smell, and texture that being in the outdoors has to offer. To simplify it – the wilderness is where we are at peace. It just feels like this is what’s important. Now I know that means something a little different to every person, but for us it means living under the stars; between the trees; on the edge of a canyon. It means being anywhere we can feel the hum of the earth instead of the noise of humanity.

If a picture could convey the way being inside the caverns made me feel, I wish I had taken it. But I didn’t take the tripod because I only had my dad’s very heavy professional monster with me. It’s a bit too much for a hike. Also being new to the DLSR I didn’t know much about taking photographs in low lighting. So, although I took several pictures the incredibly slow shutter speed resulted in many lacking in sharp focus. But that’s okay, because at the time we didn’t have our National Parks Passport book either. That means we have to go back someday to get our stamp. Next time we’ll take the elevator (if it’s working) and a tripod. Maybe then I’ll get to snap a few more pictures to share with friends and family who may never have the chance to make it. Maybe by then I’ll also be in better shape and a better amateur photographer. If we time it right, maybe we’ll also get to see the bats take flight at night.

But there is still one more stop on this day of self-discovery. So until next week – Take care and enjoy the journey.

If you enjoy hearing about our journeys and learning along with us, please consider subscribing. Take that extra step and click the like and share buttons. Your support is greatly appreciated and brings us one step closer to taking our full-time journey.

12 thoughts on “Entering Carlsbad Caverns through the Natural Entrance”