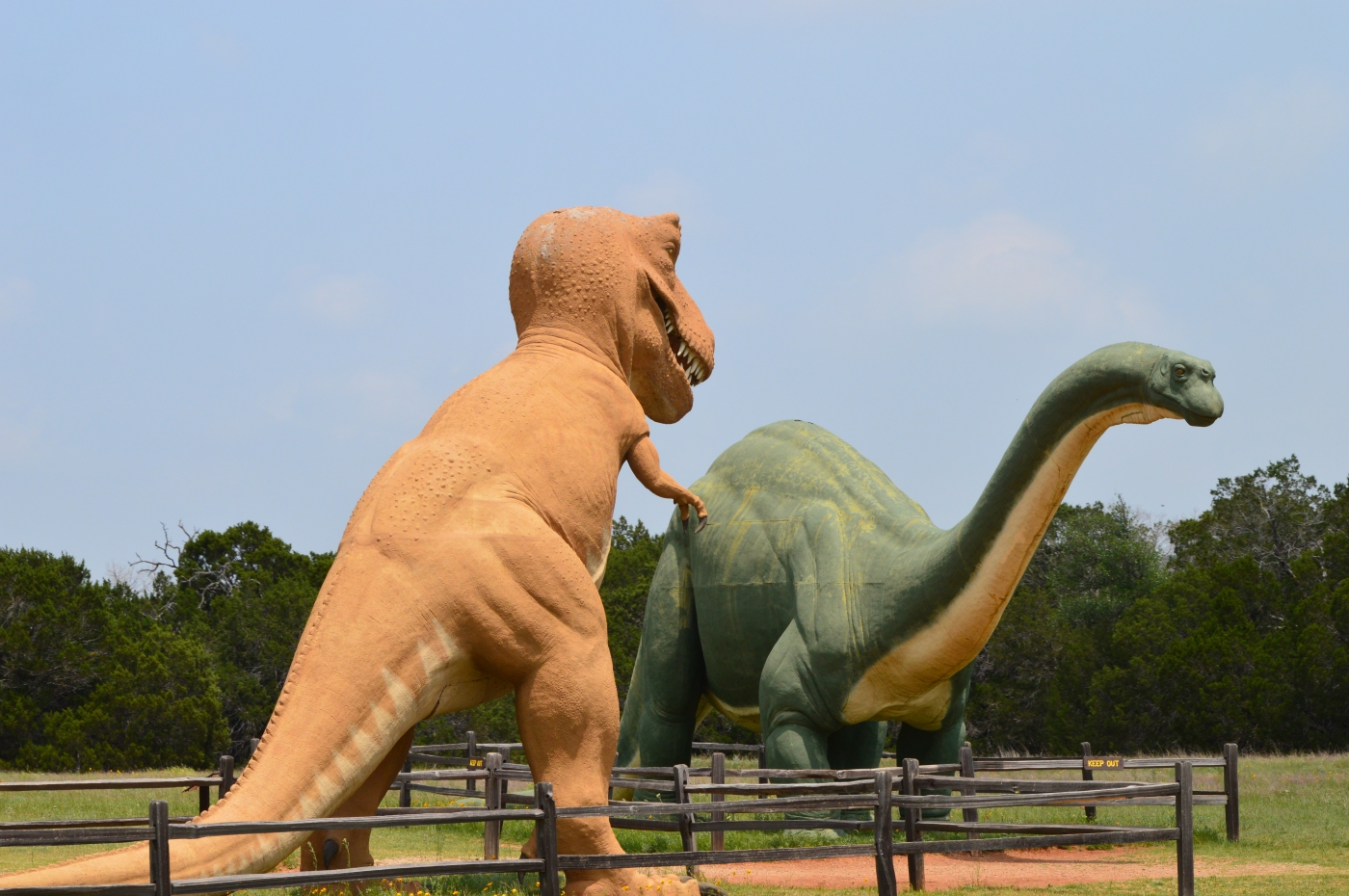 If you remember last week I told you I’d found my happy place.

After visiting Waco Mammoth National Monument, being swallowed by the vast caverns of Carlsbad, strolling across the ever shifting sands of White Sands, walking among the Petroglyphs of the Three Rivers Site and sleeping beside a field of lava at the Valley of Fires recreation area, I didn’t think the last unique stop on our trip would make the impression that it did. After all, it wasn’t a national park or monument. It was simply a little state park in Glen Rose, Texas that I thought would be a neat place to stop as we made our way back home to Florida. It turns out this WAS my happy place!

(Note: This area has been designated as a National Natural Landmark by the National Park Service)

As you enter the park you are greeted by the two large sculptures you saw in the photo above. These sculptures were donated to the park in 1970 by the Atlantic Richfield company, two years before the official opening of the park in 1972. These sculptures were on display during the 1964-65 New York World’s Fair. The 70′ sculpture represents an Apatosaurus and the 45′ one is the recognizable Tyrannosaurus Rex. Since we were in Texas, I called him the Tyrannosaurus-Tex.

A Brief History of the Park

Due to it’s abundance in resources the ancestoral people of the Tonkawa Indians inhabited this area along the Paluxy River roughly 6000 years ago. Since then the area has been home to the Tonkawa, Wichita, and Comanche Indians before they were displaced by European settlers who began establishing fur trading post and routes which later developed into settlements.

Fast forward to the 20th century and the year 1908 when a fast moving flood stripped the riverbed of the Paluxy River exposing the tracks of dinosaurs who roamed the earth 113 million years ago when this area sat at the edge of the Western Interior Sea. The mud along the edge of this ancient sea made conditions ideal for the fossilization of dinosaur tracks the remnants of which we see today.

One year after the flood the first three-toed impressions of theropods were discovered by George Adams, then only 9 years old. The tracks were left behind by the theropods identified as Acrocanthosaurus, a carnivore and relative to the T-rex. This dinosaur was 20 feet tall, 30 foot long, and weighed in between 6,000 to 10,000 pounds.

20 years later the first sauropod tracks (later identified as Sauroposeidon proteles) were discovered by fossil collector T.Y. Bird. These were the first distinct sauropod tracks ever found and the first evidence that sauropods walked on all four legs instead of wading in water to support their weight as previously believed. These sauropods were 70 feet long, measured 13 feet high at the hip and clocked in at an amazing 80,000 to 88,000 pounds!. Although this sounds intimidating they were herbivores, feasting on palms and the conifers.

Walking Among the Footsteps of Giants

When we arrived I really didn’t know what to expect. The best time for viewing the tracks is late summer, but since we vacation in our SUV and without the convenience of air conditioning we were there during the cooler, middle part of spring. At this time the water is higher and a number of tracks are submerged below the water’s surface. But we headed out to Tracksite Area #1 and the Blue Hole Site to see what we could see.

Funny story. Somehow we missed the easier stone pathway down to the site and instead went the harder way scrambling down the high banks and across the large boulders that lined the riverbank. Since I’m not the most stable person on my feet, this was quite a task, especially carrying over 5k in camera equipment on my back and around my neck. But we made it non-the-less and boy was it worth it! And yes, Mr. McGee eventually decided that splitting up the camera equipment was a much safer bet!

Above are the first theropod tracks we discovered and photographed as we made our way along the bank.

After spending some time at the Blue Hole we headed back up the bank via the easy route (above) and headed to the Ballroom Site.

The Ballroom site sits further up the river and can be seen in the picture above. We took the trail this time and soon found ourselves standing along the edge of the largest track site in the park.

Here the tracks are mostly theropods, but there are a few tracks of smaller (I’m assuming juvenile) sauropods. The tracks are pointing in all different directions and how the site earned the name Ballroom as it appears the dinosaurs were dancing. However, evidence points to a less friendly encounter as the tracks of the theropods are often elongated and show evidence of running, slipping, and sliding, causing speculation that the theropods were hunting and feeding on the sauropods.

At Dinosaur Valley State Park, respectful interaction and study of the fossilized footprints is encouraged. I put on my booties and carefully made my way across the slippery bottom and fulfilled my childhood dream of touching the past by walking amid the remains of these great giants! (To learn more about my childhood dream read our story about the trip to Waco Mammoth National Monument.)

A word of Caution: If you attempt this while the water is still covering the trackway please be very cautious. To say the rocky bottom was incredibly slippery would be an understatement!

We headed further into the park toward Tracksite Area #2. Here is where the larger sauropod tracks are mostly located and some of these tracks are exposed year-round.

We spent a lot of time, hiking the area, photographing the trackways and soaking in the importance of being able to interact with these fossils before time and the elements cause them to completely disappear. We felt fortunate to be alive during a time when an adventure like this was possible.

You only have to see the picture below to understand how happy I was to be able to touch the past in this way.

Oh and before I forget – this is also the place of our first bigfoot sighting!

We sincerely hope you enjoy hearing about our adventure and hope you are able to also learn a little something about the many wonderful places there are to visit in the lower 48 states.

Next week we make our way back home and enjoy a peaceful night just relaxing and camping. Until then…